I am the developer of Battlecruiser. Feel free to contact me for any inquiries

Today I will share the way I build up game objects in unity3d. As an example, I will take spaceship controlled by a player. I’ve spent a good amount of time figuring how to organize my game logic code and game object tree. It’s essential to build clear rules that you follow during the whole developing process. Though you also need a way to break the rule if needed. While I looked at different patterns implemented to Unity3d, I thought they are way overpowered or too complicated.

My attempt in making easy to follow pattern is dead simple and flexible : ) First, we generate a game object in a special way dividing model view, game logic scripts and data. Inside the desired game object, I attach three empty objects:

You put here all game logic scripts. You even can customize this part more by dividing scripts into states. For example STATE:ACTIVE, STATE:DESTROYED and so on. Also, it will be a good idea to add separate folders for different types of scripts. In my case, I’ve added DECORATOR child that holds all my ship decoration scripts. This child attached to STATE:ACTIVE so if I decide to switch state to something like STATE:PAUSE the scripts there will be deactivated automatically. 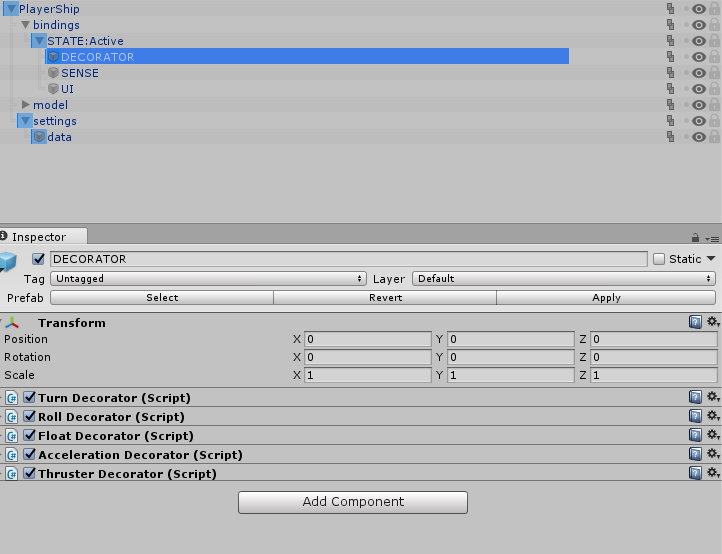 Represents your sprites or 3d models, effects, flares, generally everything that must be shown to the player. You can also attach some scripts here if they make small particular view related job. In my case, I’ve added flares, thrusters special effects and some empty transform attachments to control local rotations, scales, offsets.

I use this for initial setup file and in-game data container related to the object. During the game, all scripts from the game object turn here to fetch specific variables.

But how our scripts will communicate? We can’t just use GetComponentInParent/Children as we have a lot of siblings in our object that can contain the script we are looking.

We will solve that problem with using extended method and some initial object setups.

First, we need a script attached to the top of the game object tree, RootComponent.cs

My version of the RootComponent is a little bit different, but for example it does the job. Next, we make an extension to our transforms. To do that I’ve made a script, TransfromExtensions.cs

I have a script, let’s assume shipmovement.cs, and it needs to be linked to setup asset and data script. They are placed in settings/data.

To do that you need deeper bind to get platform’s root component. You can do that by setting search cycles.

I’m still working on making this system better and definitely will write more about it later. If you like what I’m doing you can support me by signing up to newsletter : )